Sure we all dream of a day where we reach #inboxzero. We say we're tired of email. We move to communication channels and tools like Slack, Flock, Facebook Messenger, Whatsapp and others. And we see the calls that "email is dead."

But the truth is, email is still a powerful marketing tool. According to Campaign Monitor, email marketing performs better, year-over-year, than any other channel. In fact, studies show that for every $1 spent on email marketing, companies make $38.

But has a new idea begun to ring the death knells of email marketing? Has Conversational Marketing delivered the killing blow to Email Marketing?

According to David Cancel, Co-founder of conversational marketing leader Drift, it has not. In fact in his interview with Douglas Burdett on The Marketing Book Podcast, David proposes that chatbots and a conversational experience have brought about a new era of email marketing.

At one point he even proposes that the real KPI we ought to measure with email marketing isn't clicks, but replies. As soon as someone replies to you, it's now a conversation!

How does a conversational experience add to your marketing strategy? Which direction do you go?

Sometimes we just want a quick answer. Have you ever texted someone a question, and they call you? What's your first reaction? If you're anything like me, it's a combination of wanting to throw your phone and a huge eye roll.

For your potential buyers, an email with great resources can certainly help earn their trust. And you can certainly write it in a conversational tone. But sometimes, they just want to ask a question and move on. When to use email, and when to let the chatbot do the work, is your decision.

In the same vein as deciding which channel to use, you'll have to decide which resource to put to work. Artificial intelligence (AI) can help filter users between those just browsing, your competition, current clients and prospects.

By setting up the paths ahead of time with leading questions and specific parameters for the answers, you'll help craft a journey that feels personal, even if they know it's a bot.

Then, if the user asks a question that your bot can't answer or they're ready to make a decision, you can quickly and seamlessly make an introduction to a human.

Of course, it takes humans to first set up the journey for the user, so really you're putting human knowledge, skills and personality to work from the beginning.

The key to remember is this: Just be ready to talk when your prospects are ready. Don't keep putting obstacles in their way when they're showing intent or asking for an appointment.

While forms aren’t inherently an email tool, they often connect to emails. And we had to include it as a question, because it comes up often in this greater conversation.

So, how many times have you wanted to look at some material, only to be turned off by a long form?

Forms aren't dead, but what if you could walk your prospects through the questions conversationally? Much like advertising has lost effectiveness, even in social, forms have begun to lose their appeal. If someone wants something from you in person, you don't have a clipboard. You have a conversation.

In our webinar with Drift, we talked about the myth that chatbots are cannibalizing form submissions. It’s simply not true, I shared that we’ve started using a chatbot to book meetings and we have not lost any leads. It becomes, as Mark Kilens at Drift called it, a second net. If they’re ready to talk, talk!

We took one landing page that was converting at around 40%, added a chatbot as an option to the on-page form, and turned conversions up to over 60%. It didn’t cannibalize conversions… it turned up the heat!

You can watch that on-demand video here: 3 Secrets of Creating a Conversational Experience.

As an industry, we've become pretty adept at segmenting people with intent into buckets. A marketing qualified lead (MQL) is someone who's ready to receive your message. When they're ready to talk more in-depth and go into the sales process, they're a sales qualified lead (SQL).

But there's a new designation in play now. What if someone is ready to have a conversation and connect with you, but they aren't interested in marketing messages in the traditional sense? Maybe they're looking for specific answers at a specific time, and they aren't interested in hearing about everything? If they're ready, and they're a good fit, they're now a Conversation Qualified Lead (CQL). Or a Chat Qualified Lead if you prefer fewer syllables.

What does that look like? Let's go back to David's interview with Douglas. In his book Conversational Marketing: How the World's Fastest Growing Companies Use Chatbots to Generate Leads 24/7/365 (and How You Can Too), David and co-author Dave Gerhardt propose this new world of CQL and explain it well.

A CQL goes around the traditional funnel journey, because it's how we do it in the real world. You ask the prospect some questions, they ask you some questions and you both decide if this all might work out. It feels more real world. David and his team found that CQLs are the most qualified, because they "want to take the fast lane" and move forward. 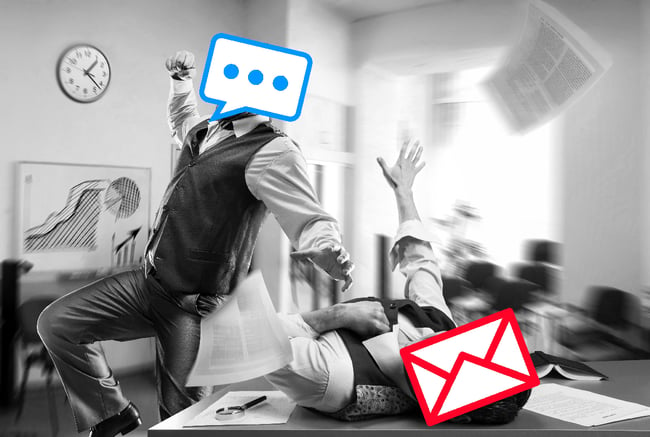 Is it time for an Email Funeral?

With each new evolution in marketing, we think that what’s worked in the past is now dead. However, that’s not always the case. Email continues to kill it in ROI for marketers.

But if you’re ignoring conversational marketing, chatbots and messaging, you’re missing out. It’s time to implement a conversational experience for your audience, even if email comes along for the ride. 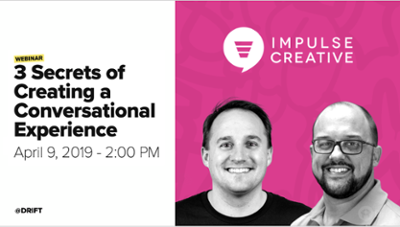